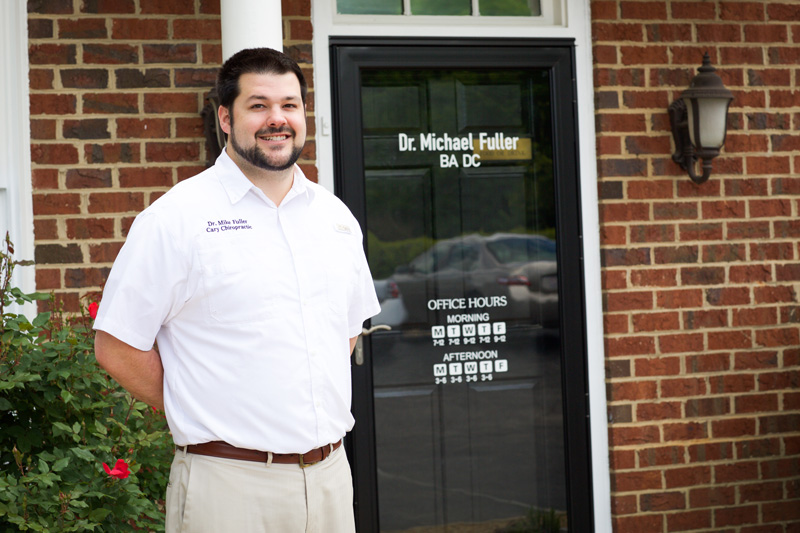 Dr. Fuller was born and raised in Cary, where he has always been heavily involved in community activities. Things were no different when he attended the University of North Carolina at Chapel Hill. While there, he coached youth basketball for 3 years, leading one team to a regional championship. He graduated with a Bachelor’s Degree in Psychology. He then moved to Atlanta, Georgia to attend Life University. While at Life, he worked at a Community Outreach Center for underprivileged families. He graduated Summa Cum Laude with his Doctorate of Chiropractic. He became Nationally Certified in Physiotherapy, was inducted into the International Chiropractic Honor Society, and was given a Certificate of Merit in the area of Philosophy of Human Existence and Health Care Policy by the University during this time as well.

It didn’t take Dr. Fuller long to realize that the Cary area was and always will be where he belongs. Since returning, he has stayed active in community sports in both Cary and Apex Parks and Recreation. In the spring of 2010, he became a team physician for the Apex High School Athletic Department. Working with children remains a vital part of his long term vision seeing as it is the reason he got introduced to Chiropractic in the first place. He suffered a back injury while in high school and if not for Dr. Watson and Cary Chiropractic, he would have missed an entire season. He wants to provide the same opportunity for student athletes to perform at their highest level.

Dr. Fuller is proficient with many different chiropractic techniques, including Thompson, Diversified, Activator, CBP, SOT, and Applied Kinesiology, although he never limits himself to one technique in regards to a care plan. Taking into account other factors like age and history, along with fact that everyone responds differently, means that he will work with you to find what is going to be most beneficial to your specific case. He will also utilize other modalities such as E-Stim, Ultrasound, traction, soft tissue therapies, and rehabilitation exercises to help our goal which remains to get you better as quickly and affordably as possible. Having issues during pregnancy? He is also experienced with pre-natal techniques as well as Webster Technique to help turn babies that are breach.

Font Resize
Contrast
Accessibility by WAH
Call Us Text Us